The biology, management and toxicity of sorghum ergot

Sorghum ergot is caused by a fungus, Claviceps africana. The disease reduces yield through poor seed set and causes harvesting difficulties due to sticky honeydew on seed heads. Grain quality can be reduced through lower nutritional value and due to the presence of fungal bodies called sclerotes (ergots). Sorghum grain contaminated with sclerotes can cause toxicity when fed to production animals, particularly sows, dairy cattle and beef cattle in feedlots.

All sorghum is susceptible to ergot. The first visible symptoms are the appearance of white fungal bodies called sphaecelia extending from the glume where seed would normally develop. From these sphaecelia, a sugar-rich exudate known as honeydew flows. The honeydew flows down the panicle and drips onto leaves and the soil. The honeydew contains high populations of macrospores that can infect unfertilized florets or germinate to produce secondary conidia capable of long-distance dispersal by wind. Secondary conidia are capable of several cycles of iterative germination maximizing the chance for contact with an unfertilized sorghum floret. Under some environmental conditions, sclerotia are produced within the sphaecelia.

Ergot can occur at any time during the growing season if suitable weather conditions occur. In experiments, a constant temperature of 20°C and relative humidity close to 100% favours maximum infection. Outbreaks in main heads during summer are associated with at least two days of rainy weather, with daily maximum temperatures below 28°C. There is a trend for increasing ergot severity as the temperatures drop towards the end of the growing season. The requirement for rainfall seems to be less critical, perhaps because dew periods are common during this period. For late tillers, forage sorghums    and male sterile lines, infection can occur under a much broader range of conditions due to the naturally lower pollen production in these situations during flowering.

What are toxic ergot levels in grain and crops?

Sclerotes of C. africana contain toxic chemicals, in particular the alkaloid dihydroergosine. Feeding trials have established that sorghum contaminated with sclerotes can affect milk production in cows and sows, and weight gain in cattle. There is a large variation in the levels of alkaloids (and toxicity) between ergot-contaminated grain samples, which is caused by differences in the maturity of the sclerotes and perhaps other factors such as weather and variety.

In controlled experiments, sows fed 0.6-1% ergot sclerotes prior to farrowing produced little or no milk, leading to loss of the litters. Ergot had less impact on sows in full milk production, but reduced piglet growth occurred with 1% sclerotes. The regulated limit of 0.3% sclerotes was tolerated by sows, but there were indications that some first-litter gilts might have reduced milk production with 0.3%. Feeds with 1% ergot were tolerated by growing pigs (greater than 20 kg) and boars without ill effect. Consequently, the limit of 0.3% is safe for all classes of pig, possibly except for gilts    and young pigs (less than 20 kg), where 0.1% is preferable.

Experiments have shown that both broiler chickens and laying hens are relatively tolerant of sorghum ergot. Sorghum containing 2% sclerotes has been fed with only very minor effects on production. The regulated limit of 0.3% sclerotes is quite safe for chickens and hens. There are no alkaloid residues in eggs. 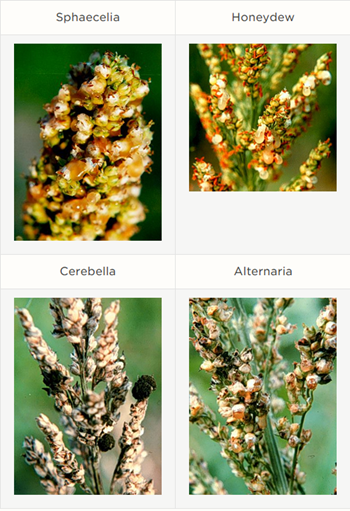