By: The Agricultural Research Council

Sorghum [Sorghum bicolour (L.) Moench] is an indigenous crop to Africa, and though commercial needs and uses may change over time, sorghum will remain a basic staple food for many rural communities. The latter is especially true in the more drought prone areas of South Africa where this hardy crop provides better household food security than maize. Sorghum is mainly cultivated in drier areas, especially on shallow and heavy clay soils. The production of sorghum in South Africa varies from 100 000 tonnes (130 00 ha) to 180 000 tonnes (150 000 ha) per annum. The Free State and Mpumalanga provinces are the largest contributors to the area planted to sorghum and sorghum production. In recent years, there has been a shift in sorghum production from the drier western production areas to the wetter eastern areas. This change in production area has resulted in the identification and development of cultivars, which are more tolerant to lower temperatures. 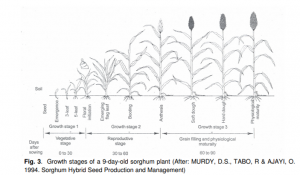 The optimum growth requirements of sorghum plants, in order to exploit its inherit yield potential, are a deep well-drained fertile soil, a medium to good and fairly stable rainfall pattern during the growing

For grading purposes sorghum is divided into the following classes:

This includes malt sorghum that does not have a dark testa (condensed tannins), is listed as a GM cultivar, and meets the requirements of Class GM sorghum as stipulated by the grading regulations.

This includes sorghum, which does not have a dark testa (condensed tannins) and is from a GM cultivar that cannot be graded in the Class GM sorghum or from a GL cultivar as stipulated in the cultivar list, and meets the requirements of Class GL sorghum as stipulated by the grading regulations.

This includes malt sorghum, which has a dark testa (condensed tannins) and is from a GH cultivar as determined by the cultivar list and meets the requirements of Class GH sorghum as stipulated by the grading regulations.

This includes sorghum, which that does not meet the requirements of Class GM, Class GL and Class GH sorghum.

SORGHUM PRODUCTS FOR THE CONSUMER

Instant beer powder is a pre-mixed product that consists mainly of sorghum malt, a starch component and brewer’s yeast. A 24-hour period is needed before the beer can be consumed.

Sorghum meal, also known as “Mabele”, directly competes with maize meal. Sorghum with condensed tannins is not used for the manufacture of meal.

Livestock feed and other animal products

Livestock feed is the most important market for surplus sorghum, as it competes effectively with other grain products in terms of price and quality. Sorghum is an important component in poultry feed and good progress has been made in the manufacturing of dog food, pigeon and ostrich food.

Source: the article is an extraction from an ARC Fact Sheet – read the in-depth version https://www.arc.agric.za/arc-gci/Fact%20Sheets%20Library/Sorghum%20Production.pdf