According to Mordor Intelligence, the South African Grain Market is projected to grow at a CAGR (compound annual growth rate) of 5,91% during the forecast period (2020-2025). Grains contribute significantly to the agricultural sector in South Africa. Maize remains the most prominent field crop in the country. The change in consumer behaviour towards domestically grown food, regional trade, technology, and mechanisation advancement in this sector are some of the factors driving the market growth of grains in the country.

South Africa is a major exporter of non-GMO and GMO white and yellow maize in Africa. According to International Trade Centre Statistics (published in the 2019, Second Quarter DAFF report), in 2018, the total exports of maize from South Africa was 2,23 million tons compared to 1,02 million tons in 2016.

Botswana, Namibia, Mozambique Eswatini (Swaziland) and Zimbabwe are some of the major importers of South African maize. Other grains and oilseeds also exported in raw and/or refined form include wheat, sorghum, barley, sunflower (seeds and oilcakes), as well as soybean and soybean oilcakes. 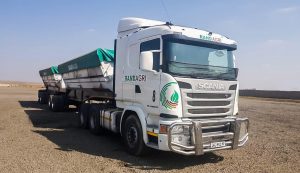 Christoph Grey, CEO of Rand Agri says: “The trade agreements made by the South African government such as the free trade agreement with African countries and the Economic Partnership Agreement (EPA) with European countries enable farmers to expand into markets across borders. Not only does it give farmers access to new and additional markets selling crops, but it also enables countries with a food shortage to offer food security to its people.” Grey continues to say that “companies such as Rand Agri provide the vital connection between the farmer and consumer’s plate. Not only do we buy, distribute, export and sell much needed grains and oilseeds across borders for refinement to feed nations, but we also sell refined food products such as maize meal and maize grits.

South African non-GMO maize is exported by grain trading companies such as Rand Agri to countries that include Kenya, Zimbabwe, Angola and Zambia. Exports of non-GMO maize to some of these countries are still in the early phase of the growth matrix with a great deal of export growth potential to these and other countries.

A secure supply of food for most households in developed and developing countries alike are ultimately dependent on global trade marketing networks. Grain is the primary staple in the diet of the vast majority of countries across the globe and countries with a deficit due to a poor harvest can only offer food security by importing from countries with a surplus.

Food chain logistics play a significant role in economies as one of the main contributors to the Gross National Product (GNP) of many countries, particularly in developing countries.

Grain traders such as Rand Agri offer complete grain supply chain solutions, from sourcing of grains from farmers to marketing and transporting/exporting it. Experienced and qualified brokers also help farmers with hedging services to manage grain prices and risks. The process of trading a variety of grain products poses several logistical, storage, transportation and delivery challenges that require a significant amount of planning, tracking and management tasks to deliver grains to the processor’s doorstep.